The Roll Tide is Picked No. 1 for Preseason College Football AP Top 25 for the 9th Time 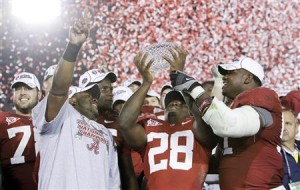 This pass Sunday, the college football AP preseason Top 25 was released, and once again the Alabama Crimson Tide is ranked No.1. This will be the 9th time over all that Alabama has been the No.1 pick, which is overall the second most since the rankings started in 1950.

Oklahoma has the most overall No.1 picks, tallying up to 10 total, just one more than the Tide.

The Tide was picked No.1 in last years preseason rankings but finished No.2 overall as the Dawgs of Georgia came to take the National Championship title. This seems to be a common struggle for anyone that is the top pick in the preseason. If a team is picked to be No.1 one, they rarely stay on top by the end of the year, it puts the biggest target on that team’s back. Alabama has only twice been able to stay up top, and only one time has been under Nick Saban, which happened last in 2017. Last year was a prime example of the struggle it takes, and Coach Saban recognized this as he says that last year was a building year for the Tide. (Ranked #1 and finishing #2 doesn’t seem all that bad to me). But this year, Saban and the team are feeling fresh and ready to fight.

With reigning Heisman winner Bryce Young and national defensive player of the year Will Anderson Jr. and the rest of the Crimson Tide, they are sure to dominate but also be put to the test. Bryce Young, threw for 4,872 yards and 47 touchdowns and that was his first year as a starter; now he is back and has some experience underneath his belt. Along side Young is Will Anderson Jr,  who was a force on the defensive side. The sophomore led the nation in tackles for loss with 33.5, 11.5 more than No. 2 on the list.

Love Is In The Air