Cow Makes Better Life For Himself

Earlier this month, a cow in Brazil was able to make a complete change in its life’s direction totally by accident.

The steer was on a farm in a small town about 500 miles west of Rio De Janeiro and was destined for the slaughterhouse. The farm is next door to a club that features a swimming pool and a large curving waterslide. The cow got loose and wandered onto the grounds of the club very early in the morning. The cow managed to get onto a stairway that led to the waterslide and climbed to the top before sliding about halfway down the waterslide and stopping. It stood there on the slide taking everything in as the club’s employees started arriving for work about 8:30 in the morning. When they saw the cow on the slide and immediately went to inform their boss, he thought it was a big joke. He quickly discovered that there was indeed a cow on the club’s waterslide.

They were able to coax the cow down the slide and into the pool and thankfully the cow was not hurt. The club’s president was surprised the slide didn’t collapse since it has a weight limit of 450 pounds and the cow weighs close to 700 pounds.

The cow was returned to the farm where the owner says it will not be going to the slaughterhouse since he is now a local celebrity with people coming to the farm and wanting to see him. The farmer says the cow will live the rest of his life as a pet and not as livestock.

He’s even got a name now…Toboga…which is Portuguese for “slide”.

Maybe Chick-Fil-A would like to use him on some billboards. 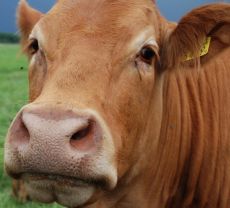 Win Travis Tritt Tickets at the World of Wheels

2021 Tennessee Valley Nurse of the Year

Live from the Pepsi Studios

Susie Q in the Morning