Passed away after earler erroneus reports of his death 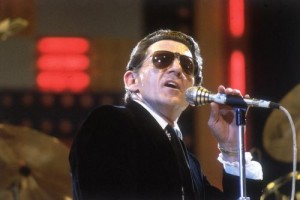 Jerry Lee Lewis, the Country Music Hall of Fame’s newest inductee, has died at age 87. The iconic rock ‘n’ roller and country star died on Friday morning (Oct. 28) at his home in Mississippi. He had been battling the flu, according to a post on his official Facebook page on Oct. 19, but his cause of death was not revealed.

A message from Lewis’ official publicist confirmed the news and the date of his death.

Those in attendance during his Oct. 16 induction ceremony into the Country Music Hall of Fame knew that Lewis was ailing, as Hall CEO Kyle Young shared that the octogenarian had informed the Hall that very morning that doctors thought it would be too risky for him to travel to Nashville. So, instead, Lewis wrote a letter and asked Hank Williams Jr. to read it on his behalf. Kris Kristofferson accepted the medallion for him.

Nicknamed “The Killer,” Lewis shot to fame in 1957, when his rockabilly song “Whole Lotta Shakin’ Goin’ On” became a crossover hit. The recording came after he covered Ray Price’s “Crazy Arms” to moderate success. Within a year, hits including “Great Balls of Fire,” “Breathless” and “High School Confidential” made him as important of a member of the famed Sun Studios sound as Elvis Presley, Johnny Cash and Carl Perkins (together known as the Million Dollar Quartet).

A fourth single called “You Win Again” helped give Lewis four Top 5 country songs (and two No. 1 hits) in a row. He was a true superstar.

“Jerry Lee doesn’t walk on stage and politely thank an audience for being there,” Williams stated at the 2022 Medallion Ceremony. “Jerry Lee doesn’t ask for your attention. He demands it. He doesn’t take a stage, he commands it.”

As a live musician, no one could challenge his command, either. He’d use all of his limbs and each of his 20 digits as a weapon against his piano, and if that didn’t work, he might just set it on fire. That was something he is really said to have done, as he didn’t feel that anyone — including Chuck Berry that night — should follow his act.

While known for a definitive and influential boogie-woogie, this founding father of rockabilly could also ease into a country ballad with a Hank Williams-like passion, and if pressed, play songs from any genre of music you threw at him. In a 1978 article in People, record producer Jerry Kennedy described him as something of a self-taught savant:

“Jerry Lee on the piano seemed to pump chords straight into the adrenal glands of American youth, and his voice was raw, loaded with inflections of menace and sexuality” Kennedy told People Magazine in 1978.

“It’s an infectious thing with Killer,” Kennedy noted. “The top session pickers respect him deeply as a musician and always get excited when he’s in. Most times, he hears new material once, rehearses once, I turn on the red light and he hits it on the first take.”