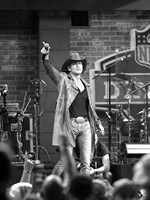 Tim McGraw tops the Country Aircheck/Mediabase chart this week with “7500 OBO.” He shared the news on social media yesterday writing, “Thanx Country Radio for making “7500 OBO” the #1 record this week. We’ve got new music coming soon! Buckle in!!” This is Tim’s 45th Number One hit, according to Country Now.

As a car enthusiast, Tim was immediately drawn to “7500 OBO” but he admits that while he’s attempted it, being a good mechanic is not in his wheelhouse.

Kenny Chesney Announces Nostalgic "I Go Back" Tour for 2023