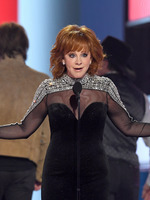 Reba McEntire will be hitting the road this fall.

The singer-actress is set to embark on the Reba: Live in Concert tour with support from Terri Clark.

McEntire will start things off in Lafayette, Louisiana on October 13th at the Cajundome.

She’ll then make stops in Fort Worth, Texas at the Dickies Arena, Austin, Texas at the Moody Center, Tampa, Florida at the Amalie Arena and will close things up in Wichita, Kanasa at the Intrust Bank Arena.

The tour’s final date is on November 19th.

I’m heading back out on tour this fall with my buddy @TerriClarkMusic! Tickets go on sale this Friday, but you can access a special fan presale starting tomorrow at 10 AM by signing up for my email list here: https://t.co/646sSuUVDl pic.twitter.com/YkabMGlkRv