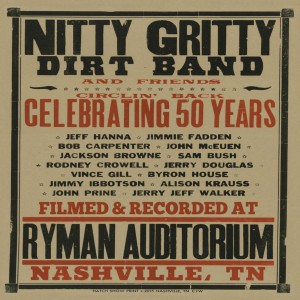 For five decades, theNitty Gritty Dirt Band has remained one of the most iconic names in American roots music. With one foot planted in the traditions of country-folk and the other pointing toward something new and unexpected, the group continues to tour and release music, influencing multiple generations of audiences and artists along the way. Nearly a dozen of those artists join the group on this year’s Nitty Gritty Dirt Band and Friends – Circlin’ Back: Celebrating 50 Yearsconcert album, released Sept. 30 on NGDB’s own label, distributed by Warner Nashville. As of yesterday’s SoundScan report,Circlin’ Back hit #11 both on the Country Albums chart and Americana Folk chart, while topping the Bluegrass chart at #1 in the first week of sales.