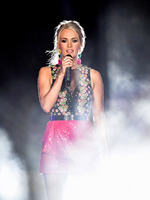 Carrie Underwood was a surprise guest at both of Guns N’ Roses‘ weekend shows at the UK’s Tottenham Hotspur Stadium. She sang two songs with the band during their July 1st and 2nd shows — “Paradise City” and “Sweet Child O’ Mine.” Carrie was in London last week to promote her new album, Denim & Rhinestones, which debuted as the Number One Country album in the UK.

Carrie made several posts sharing pictures from the concerts on social media. In one she wrote, “I am but a fan who somehow managed to find her way on stage to have a moment of magic with her heroes! How did I get so lucky?”

In April, Axl Rose joined Carrie onstage to perform a couple of Guns N’ Roses hits during her headlining set at the Stagecoach Festival in California.

Never in a million years did I think I would get to spend not one but TWO nights of my life on stage with @gunsnroses! Thanks, again, to the band and crew and, of course, to the fantastic crowd! The energy was ⚡️⚡️⚡️!!! Until next time… https://t.co/OzISjSKJVe pic.twitter.com/KjUDWlZOb9